Resources, information and assistance from across state government. Visit the Information Hub 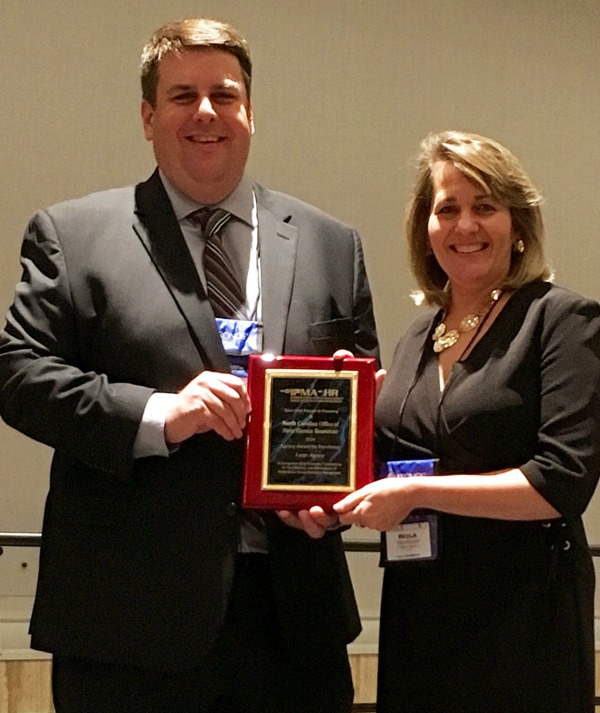 The on-going modernization and efficiency initiatives in North Carolina state government, spearheaded by Governor Pat McCrory, are getting recognition beyond the bounds of North Carolina. The International Public Management Association for Human Resources (IPMA-HR) has selected the Office of State Human Resources (OSHR) as the 2016 recipient of the IPMA-HR Agency Award for Excellence for large agencies.

OSHR Interim Director Paula Woodhouse states, “When I joined OSHR nearly 4 years ago, it quickly became clear that the state’s HR functions were dire in need of modernization; so with the support of Governor McCrory we went to work modernizing our HR strategies and implementing innovative and more efficient processes.”

The IPMA Award of Excellence recognizes the overall quality, accomplishments, and contributions of an agency that exceeds the normal operation of a “good government human resource program.” OSHR earned this recognition by prioritizing their efforts on programs and processes that supported the primary mission of OSHR: to attract, hire, and retain the best and brightest to serve the people of North Carolina.

Specifically, OSHR received the honor for a set of HR programs that address workplace safety, employee recognition and job performance. These are new programs that have undergone significant improvements over the past three years. Improvements in workplace safety are particularly notable. Employee injuries are down nearly 20 percent, which saved the state millions of dollars in workers’ compensations costs.

The IPMA Agency Awards were presented during the 2016 IPMA-HR International Training Conference & Expo held this week in Kansas City, MO.