Skip to main content
COVID-19 Vaccination or Testing Policy Requirements for COVID-19 testing and face coverings as an alternative to proof of full vaccination. Visit this page for current policy
COVID-19 Resources, information and assistance from across state government. Visit the Information Hub

The Office of State Human Resources (OSHR) today launched a new pedestrian safety initiative, WalkSmartNC, by encouraging state employees and others who live in, work in or visit the State Capitol to provide feedback to the online Downtown Raleigh Pedestrian Safety Study.

“We urge everyone who spends time walking in and near the Downtown State Government Complex to let us know about areas where they believe safety can be improved for pedestrians,” said State Human Resources Director Barbara Gibson, who joined representatives from several state agencies early this morning to provide handouts about the study.

In addition to pedestrian-motorist crashes, Gibson said WalkSmartNC will focus on the frequency of near misses that could have become devastating tragedies.

“Drivers sometimes rush pedestrians in crosswalks, or don’t see them because they are driving too fast. And pedestrians sometimes are too distracted by their phones or devices to be sufficiently aware of their surroundings,” Gibson said. “It’s not unusual to see other pedestrians shout or reach out and grab someone to stop them from walking right into traffic.”

State Parking Director Susan Weiss participated in the morning outreach at the Salisbury Street entrance to Parking Deck 64, near Peace Street. Weiss used this opportunity to educate state employees of parking deck safety, highlighting the deck’s designated speed limit of 5 mph. She also encouraged employees to use sidewalks or marked crosswalks to get from parking areas to offices, where they are less vulnerable to fast-moving traffic.

The number of pedestrians injured in collisions with cars is going up, not just in Raleigh but also statewide and nationally. The Division of Motor Vehicles reports that 225 pedestrians were killed in North Carolina in 2018, a jump of 12.5% from 2017.

The National Highway Traffic Safety Administration states that pedestrian deaths increased nationally from 12% of all fatalities in 2009 to 16% in 2017. In 2018, U.S. pedestrian deaths hit a 28-year high, according to the Governors Highway Safety Association.

OSHR’s Safety, Health and Workers’ Compensation Division convened a group of safety leaders and representatives of state and local organizations earlier this year with the goal of reducing traffic-related injuries to state employees and other pedestrians. To collect data that would inform an effective awareness campaign, interactive technology is being used to allow pedestrians to provide feedback, track walking routes and even “pin” potentially hazardous locations on a map.

More than 600 Downtown Raleigh Pedestrian Safety Study responses had been logged by 11 a.m. today. The study will continue to collect pedestrian input through Nov. 8. 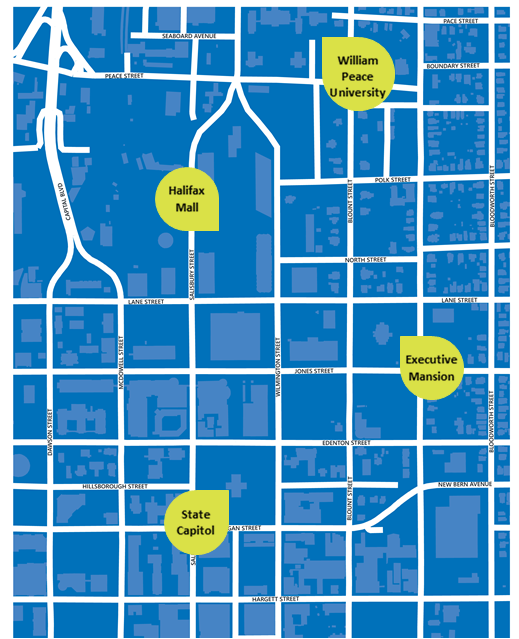 The study is being conducted under the direction of the DOT. Findings will inform a pilot awareness campaign and best practices guide that may be used statewide and by other safety-minded communities and organizations.

“Through WalkSmart NC, we are creating a model program that can really make a difference,” said Mark Ezzell, Director of the Governor’s Highway Safety Program, which provided a grant to fund the program. “This collaborative, cross-agency initiative will use robust data to identify safety problems and inform solutions. We want to create a model program that can be implemented by other large employers statewide and beyond.”

Tia Chapman, an employee of the Department of Public Safety, also participated in this morning’s outreach activities. After picking up her state employee identification badge on her sixth day of work in November 2018, Chapman was hit by a car while walking back to her office. She had waited for the crosswalk traffic signal and was using a marked crosswalk when the incident occurred.

“I feel like this is my chance to help people understand what it’s like to get hit by a car when you’re following the rules,” said Chapman, noting that the driver fled the scene when she suggested reporting the crash to police. “We should have some sense of knowing we’re safe when we walk. I hope it will help protect someone else from what I’ve been through.”